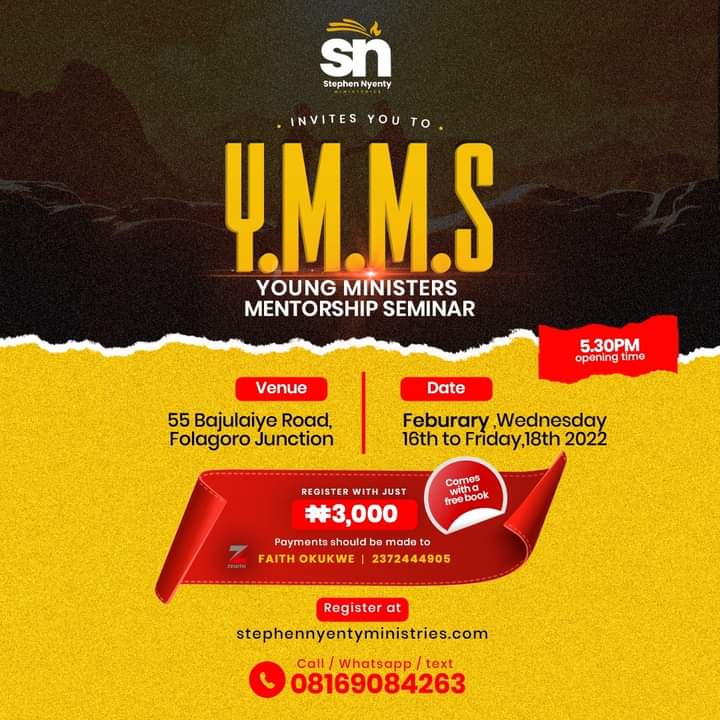 Y.M.M.S
In 2017, December twelve he had an encounter with the Lord, Reverend Stephen was told that the Lord intends to use him specially to minister and strengthen pastors, church workers and serious Christians. By August 2019, the lord told him the time to start this ministry was very close and by April 2020, the Lord gave him the name of this ministry, what the ministry would entail and what it is about.
Y.M.M.S is an abbreviation of Young Ministers Mentorship Seminar and Society. The prophetic scripture for the ministry as the Lord gave it to him is Isaiah 60 vs 4-6, 8-11, 21-22 and 1Peter 8 vs 8-10.
The focus of this seminar and society would be :
1. Ministers who run or are involved in Para-church ministry
2. Discipleship and Prophetic ministry particularly to young people.
3. Ministers or ministry who are just starting or within the first ten years of ministry.
PURPOSE OF Y.M.M.S
1. Heal the hearts and strengthen the hands and work of ministers going through accusations and ministerial Waterloo.
2. Help build the foundation of ministries that would be in the forefront of the birth of revival in the land.
3. Sweeping out through( teaching, prayers, counselling and providing ministry materials) all forms of bitterness, discouragement that has bewildered ministers.
4. Through this platform, partner with the Lord to help ministers enter into their full offices and anointing into the Teaching, Prophetic, Apostolic, Missionary and Healing Ministry.
It is called Seminar and society because, as the Lord has instructed, we would organise seminars yearly.
It is called a society because this would be a shelter for ministers who need and seek for Ministerial Covering, Mentorship, Fathering and Friendship.
FEATURES OF THE SOCIETY
1. Ordination and impartation into ministry
2. Ministerial Counseling
3. Ministry Consultation for solutions to ministry issues.
4. Monthly teaching and prayer meetings via social media
PROPHETIC VISIONS
As I prayed towards the Y.M.M.S, the Lord showed me through the instrumentality of an Angel in pictorial visions.
I saw a foundation rising out of the ground and I saw something like a strong wind ofwave, stirring round. The Lord says in my spirit, I will be using you and this platform to build the foundation of ministries that would be in the forefront of the birth a revival in the land. This one's are coming as children needing milk and ministerial nourishment. They won't take upon themselves any form of reputation.
As I kept praying I saw me with a broom, I was in the heart of some of the ministers sweeping out the dirt of bitterness, discouragement, low esteem. As I kept sweeping, I noticed the expressions of this ministers beaming with joy and excitement, returned to do the work of the ministry and consequently, they began to see again and flourish.
The Lord says to me, Stephen, heal their hearts, strengthen them from accusations and ministerial Waterloo.

BOOKS BY STEPHEN NYENTY ARE AVAILABLE FOR PURCHASE ON OUR BOOK STORE. CLICK ON BUY NOW TO SEE ALL OF OUR BOOKS AND PLACE AN ORDER.

Stephen Nyenty Ministry A.K.A Reach4Life Discipleship Ministry, is a teaching and prophetic ministry. Founded on the 12th of September, 2010 by Reverend Stephen Nyenty.
Learn More